The Opposite of Sports

Sure, but suppose you don’t give a shit about sports. Not in a mean or arrogant way, you just don’t.

You don’t watch the games or the analytical talk shows and you don’t even know who the giant guys in suits on the shows are. You walk into a bar and it’s packed and you’re puzzled. Is it the 4th of July? St. Patrick’s Day? Was school cancelled for tomorrow and these are all a bunch of hammered teachers? Where did all these people come from?

And it turns out they’re all there to watch some kind of sports thing you’re supposed to know about. You can’t shake the feeling that a solid chunk of these people have to be pretending to care about the total strangers playing the weird game between commercials on thirty-five screens, but you can’t find any of them. These very, very similarly-dressed people definitely care.

Then you get on Pencilstorm and that’s what they’re talking about – sports. And it’s not like an average room where you can simply agree with the largest male about whatever he says with regards to sports and everyone will accept you. It’s writing.

People are going to be able to re-read and figure out that you’re just sitting here, not blogging while the other guys blog. You can’t nod your head through an entire blog post. And guess how long sports go on? Forever.

Normally what I do is I act like a smug prick about it. I’ll refer to your favorite team as “your favorite group of total strangers,” tell theatrical stories about not knowing about the sports you’re so excited about. Blog about it while you’re watching sports.

And you know, it’s not so much that people don’t like that, it’s more that they don’t care because you’re not sports. You just pop out of their minds like soap bubbles.

And then what you’re left with is people who don’t care for sports, but who like smug pricks. That’s a pretty narrow market. 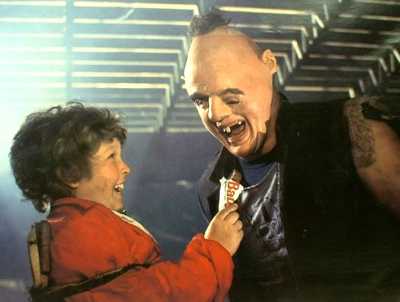 So I went on over to Pencil Storm to try and gain their trust, thinking maybe I could get them to teach me about sports. I remembered how Princess Leia gave that Ewok a cracker, and how Elliot gave E.T. some Reese’s Pieces, and how the Goonies gave Sloth a candy bar. I thought, well they were all trying to gain trust, I’ll try that. And it went great at first, but when I ran out of candy and crackers, Johnny DiLoretto bit me and Brian Phillips threw his beer across the room and Colin made us all take naps.

I remember lying there in my new Pencil Storm Cubby having my time-out and thinking, remember when The Dark Knight made about $158 million on its opening weekend? Pretty cool compared to the second place movie  – Mamma Mia – which made almost $28 million. Still, that seems like a lot of money for Mamma  Mia, and the reason it did so well seemed simple.

Mamma Mia is the opposite of The Dark Knight. It was a good move releasing it against The Dark Knight, because everyone who wasn’t jacked about seeing The Dark Knight was really keen to strap on a pantsuit and drink in Mamma Mia.

So that was really the question I needed to ask the walls of my cubby – What is the opposite of Sports?

And in a serene moment with really mystical pipes and flutes playing, I suddenly knew. Downton Abbey. The very opposite of sports.

So I spent about six hundred words explaining that at the beginning of my Pencil Storm post, and then Hassler came stomping around, making Charlie Brown teacher noises about how four thousand words was too long for a blog post. He turned out to have a machete down his left pants leg, yanked it out and chopped the first third of the way-too-long blog post off, and so now you’re getting it reheated for your supper, blogosphere. Cause Tommy C. doesn’t feel like cooking.

The rest of the Downton Abbey post is right here.

This is me by the way when I still had some cookies, trying to get them to teach me about sports and microwave ovens and digital alarm clocks. Great bunch of dudes til the cookies run out.

← Older posts
The Curse of Future Tom
Blog at WordPress.com.